Below is the Wikimedia UK monthly report for the period 1st to 31st December 2013. If you want to keep up with the chapter's activities as they happen, please subscribe to our blog, join a UK mailing list, and/or follow us on Twitter. If you have any questions or comments, please drop us a line on this report's talk page.

File:Ridges of tuff on lower slopes of Soufriere Volcano. TA81.jpg
Aftermath of the Soufriere eruption 1902 - photo by Tempest Anderson

On the 4th December we had an Art Nouveau editathon partnering with Plus Partage. This gave us the opportunity to tap into the expertise of a volunteer whose real life job involves valuing Art Nouveau objects for Christies.

On the 9th December John Cummings ran an editathon in Southampton covering Women in Science.

The British Library announced a major image release of circa 1 million images.

The massuploading tool went live on Commons and is now available for live testing - unlike most of our existing tools it has the ability to generate categories from data in xml databases. So a non-programmer can use it to upload hundred thousands of files without having every file in an upload go into the same categories.

WMUK and the Royal Society were delighted to announce the appointment of John Byrne as Wikimedian in Residence. John takes up his post in January.

On the 20th, Robin Owain and Aled Powell presented to 27 IT lecturers at the college, outlining Wikimedia projects, the work in Wales and looking at how colleges are opening their doors to wiki editing skills and open content.

Software Alliance Wales has also started to train the community in wiki editing skills, thanks to the Living Paths Project, in Wales, with 8 of their lecturers having been trained by Robin at Llanelli and Dolgellau. SAW trainers will now pass on these skills to the wider community, and the first full day took place at Lampeter on the 10th at the University. 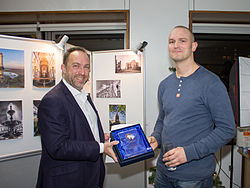 10th December saw the awards ceremony for the winners of the Wiki Loves Monuments UK photography competition take place at the Wikimedia UK office. The event coincided with the charity's community Christmas party and was attended by over thirty people.

Wiki Loves Monuments is the world’s largest photography contest. The objective is to collect high quality photographs of some of the world's most important buildings – in the UK for 2013, this meant Grade I and Grade II* listed buildings. Over 570 people took part in the UK competition, contributing more than 12,000 photos to Wikimedia Commons.

Jimmy Wales, founder of Wikipedia, said: "It's fantastic that so many people took the time to contribute their photos to the Wiki Loves Monuments competition. The standard of the winning images is incredibly high and I'm very pleased to be able to present the winners with their awards."

Robin Brown, who received a highly commended prize for his photo of Wrest Park Banqueting House said: "I'm still trying to decide if I am more delighted to have a glass trophy for the mantelpiece or in having my image selected by an exceptionally talented group of my peers for an award. I think it's probably the latter though."

Information about microgrants that are currently running, and how to submit a microgrant application of your own, are at Microgrants/Applications.

For events in March 2014 and onwards, please see Events. 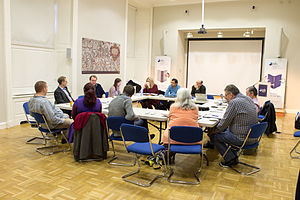 The December board meeting

The December board meeting was held in Edinburgh on 7th and 8th December. The venue for the first day was the National Library of Scotland and on the second day was 19 George Square. There was a social event on the Saturday evening where the board were able to meet Scottish Wikimedians. The minutes for both days of the meeting are now available online here and here. It was the first board meeting for Carol Campbell, Simon Knight, Padmini Ray Murray, Joseph Seddon, and Kate West. During the meeting Chris Keating stood down as chair of the board and Michael Maggs was elected in his place.

Please see the above links to relevant press coverage received in December and blog posts published during the same period. In other news, Wikimedia UK is in negotiations with the BBC to develop a memorandum of understanding which could lead to some very worthwhile collaborations. Work to develop the open coalition continues. Wikimedia UK has agreed to fund a short-term part-time project manager to expand upon this work. While funded by WMUK, other groups such as Creative Commons, Open Knowledge Foundation and Mozilla are also involved in the work. Details of the role will follow in January. The chapter also signed the Free Knowledge Advocacy Group EU statement of intent, joining seven other European chapters. Simon Knight and Stevie both presented at the Nexters / KPMG event for education, social and tech entrepreneurs.

If you're interested in getting more involved with our communications or have any questions or comments, please email Stevie Benton – stevie.benton@wikimedia.org.uk

This month, we received £1,352.00 in one-off donations, with 55 individual donations. The average donation amount was £24.58 - 42% of these donors have had Gift Aid Declarations made and matched with their records. If anyone would like a full (but anonymised) csv file with more information, please get in touch with katherine.bavage

wikimedia.org.uk and let her know your requirements.

Up to 31st December 2013 there were 237 members of the charity eligible to vote.

Visitors to the office this month[edit | edit source]

The office received 78 visitors this month.