"Wikimedia: linking research impact and open education" is a series of workshops given by Martin Poulter from October 2013 to March 2014 as part of the Wikimedia UK/Jisc collaboration. These will usually be given as part of an institution's existing teaching innovation seminar, or elearning seminar.

The intended outcomes of the workshops are:

This effort will be supported with case studies and other media, which will be linked from this page.

Contact Wikimedia UK to request a workshop in your own institution, or with any other query about this series of workshops. 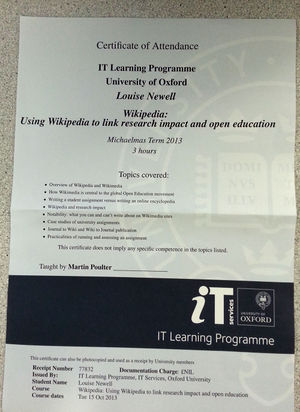 Wikipedia does not just aim to provide free knowledge to everyone in the world: it actively invites everyone to contribute. It sees the public not just as recipients but as potential creators and remixers of its text, images and other media. At the same time, it seeks credibility and expects to cite the most reliable sources in each subject. Educational assignments on Wikipedia, or its sister sites, are a chance for students to experience publication and to create their own educational materials. Dozens of universities are now setting assignments in which students improve Wikipedia, in effect creating their own textbook.

With a mix of activities, this workshop will show how learners are already creating and remixing material within Wikipedia, and take participants through some of the steps in designing an educational activity around the research resources in their subject area. It will look at specific examples, and realistically set out the advantages and pitfalls.

No previous experience of wiki editing is assumed.

This report focuses on HE-relevant requests. A fuller list of requests is documented at EduWiki_Conference_2013#Next_steps

Some "next actions" were reported verbally: 1) use ideas from this conference in presentations in universities, 2) submit a proposal to an information literacy conference, 3) invite Martin in to department to speak to colleagues, 4) various possibilities both in sharing content and studying the handling of controversial topics in Wikipedia

I will do something new as a result of attending today. (1-5)

The most interesting thing in the session was

One thing that would have improved the session was

An academic course leader expressed (verbally, not on a form) an interest in Wikipedia education assignments in the area of psychology. We have his email address and he received a case studies brochure.

Note that the lower the score on this question, the better.

One attendee approached me after the workshop to say that she hadn't filled in a form, but definitely wanted to do something in her work as a result of the workshop. She just needed time to reflect on the different activities that had been presented. Another attendee will soon be running a MOOC about Hadrian's Wall which will produce freely reusable content. She said and was "buzzing" with different ways the Wikimedia projects could be involved. We discussed, for a start, the possibility that learners could visit and photograph sites; uploading, describing and geotagging the photos in Commons.

Ten people signed up, and five turned up on the day. The session, which had been booked months in advance, overlapped with a period of industrial action, and this was the cause of some of the non-attendance. Attendees included the Head of Learning and Teaching and the Academic Staff Development Co-ordinator, but all attendees were involved in delivering courses and/or shaping teaching practice in some capacity. I have been asked to return and give a session to a larger audience at an institutional e-learning day.

Note: going by the face-to-face comments, the written feedback on the forms, and the fact that on face value they said they knew less about at the end of the session than they did at the start, it seems two of the forms interpreted "1" as "strongly agree" and "5" and "strongly disagree". I have reversed the polarity of their answers in this analysis.

Sixteen evaluation forms were collected, and twelve request forms. One attendee said she deliberately had not filled in a request form because she wanted to do something but would need to think through the options. Wikimedia UK volunteer Harry Mitchell sat in on the session and helped with a question (not included in the evaluation forms).

My wifi connection worked through the first hour but suddenly stopped working towards the end, which was frustrating.

This was a one hour workshop, so I focused on education rather than research impact, and went into more detail about how Wikipedia articles are developed. See Expert_outreach/Jisc_Ambassador/Jisc_Digital_Festival_2014

There were 22 attendees, about a dozen of whom said they would start to edit Wikipedia themselves (and who took away Welcome to Wikipedia brochures). One outcome was a request to speak in a learning-and-teaching seminar at the University of Leicester. Feedback forms were collected but were lost on the way home from Birmingham.