From July 2013 to April 2014, Jisc and Wikimedia UK are jointly supporting a project to encourage a range of audiences (librarians, teachers, researchers and students) within learning and research to engage with Wikimedia UK and Wikimedia projects. This project overlaps the cultural partnerships, expert outreach and education projects areas of Wikimedia UK's work. 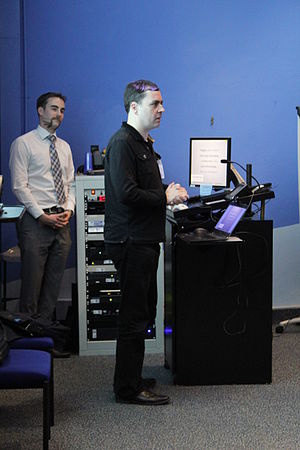 Martin presenting at the Royal Veterinary College at the outset of the Veterinary Science editathon, with Chris Trace of WikiVet

The project is producing:

All materials created under this project are released under free (Wikipedia-compatible) licences.

Subsequent activities affected or inspired by the project[edit | edit source]

Among the many projects supported by Jisc are collections of digital content; research in areas such as Digital Humanities and Virtual Research Environments; and the UK Open Educational Resources programme. Jisc promotes open access to research as part of the UK Open Access Implementation Group and its work with institutional repositories. Jisc also influences practice in Higher and Further Education through its work in innovation and change management. See the blog post for more about the collaboration project's rationale.

Before this project, Wikimedia UK's work with Jisc has included the World War I editathon, the Digital Infrastructure team workshop and workshops at the Changing the Learning Landscape Strategy Implementation Programme event. Two of Jisc's programme managers spoke at the EduWiki Conference 2012, as did staff from Jisc TechDis and Jorum. Wikimedia UK had a presence at the Jisc-sponsored Open Educational Resources 2013 conference. Wikimedia UK's Martin Poulter and Jisc CETIS' Phil Barker collaborated on a help sheet for developers about Wikimedia Commons. In March 2013, Wikimedia UK's blog ran an interview with Oxford University's David White about his Jisc-funded research into use of sources by school and university students.

Here is an overview of some topics in which both Jisc and the Wikimedia movement are active. It is not meant to be comprehensive (and suggested additions are welcomed) but it deliberately excludes some Jisc activities which do not have a counterpart in Wikimedia, and vice versa.

Dr Martin Poulter acted as an Ambassador between the two communities, with the support of the Faculty of Social Sciences and Law at the University of Bristol as well as the two partner organisations. He was employed part-time alongside his two other jobs at the University.

Martin is a veteran contributor to English Wikipedia, with more than eight thousand edits. See elsewhere for Martin's past publications about Wikipedia and his Wikimedia-related talks and presentations. In the past he has worked on Jisc-funded Open Educational Resources projects and taken part in events about co-operation between Jisc and the HE Academy.

Objectives and justification for the project, stakeholder analysis and a detailed plan are available on a separate page.

You can follow the project in greater detail on the dedicated user page, User:MartinPoulter_Jisc. Martin will continue to take part in Education Committee meetings and will report on major developments in those meetings and their minutes.

There was a short overview on the project, with some critical feedback, in the WIR Programme Review published in 2014.

To send queries to Martin, it is best to email m.l.poulter